Fate of Voluntary Returnees to Chechnya 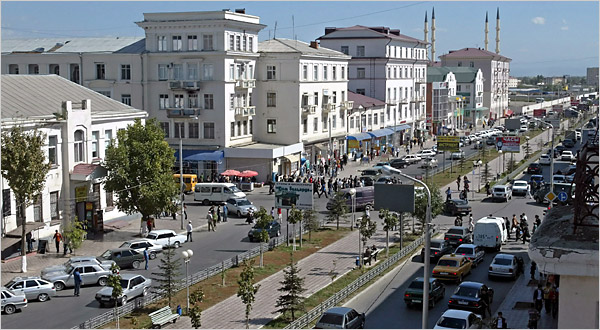 According to the article, for sixteen of the last 20 years the Chechen Republic of Ichkeria has been at war with the Russian Federation. The other 4 years were not peaceful either. Throughout this time, Russia has been convicted 210 times in front of the European Court of Human Rights in Strasbourg while another 330 cases are still pending. At least 180,000 people have been forced to leave their homeland in order to save their lives. Today, in Austria, approximately 25,000 Chechens live and new asylum seekers arrive still arrive on a daily basis. There are 2,134 Chechens currently seeking refuge there, but in the last few years, the approval rate has dropped from 94 percent to 31 percent for these asylum seekers. Thus in Austria, an increasing number of Chechen asylum seekers voluntarily return to their occupied homeland, no wonder some of them believe the strong propaganda, but others have no choice other than to return because of the refusal of their asylum requests and the strong practice of Dublin II enforcement. In 2011, 528 Chechen asylum seekers accepted voluntary return, their tickets were paid by Austrian authorities and they returned. However, this number does not include the ones who paid for their own return tickets. “Die Presse” journalists have recently visited the Russian occupied Chechen Republic of Ichkeria to observe the current living conditions and to speak with former asylum seekers.

Isa Khadzhimuradov, director of the Department of External Relations [from the pro-Russian regime] wants to see more stories on voluntary returns. To accomplish this aim, he travels a lot. Recently, he was in the Czech Republic and Germany to meet with Chechen diaspora members. He describes his mission as a difficult task because his boss, Ramzan Kadyrov is a “persona non grata” in many countries. However, he talks about their idea to open so-called cultural centers in the countries with large exile communities, including Austria and Turkey. In 2013, this idea will be realized with money that will come from the funding of the pro-Russian Chechen regime. “When people return calmly and quietly, there are no problems. You can see there are people who work in the government who were once on the other side,” claims Khadzhimuradov.

In reality the situation is a bit different than the rhetoric of pro-Russian representatives. The pro-Russian Chechen leadership offers nothing to the exiles. No homes, no jobs. The unemployment rate is currently at least 70%. A flood of returnees would probably lead to social tensions.

Aset K. is a 61 year old former nurse who returned from Austria recently. Before her voluntary return she was living in Graz, Austria where her brother lived. “In this world, I have only my brother. But my asylum request was not handled positively, and when I received the second negative decision, I decided to return voluntarily. I could continue to fight in the courts, but I do not have the nerves for it,” she says. Now she laments the forced Islamization of the Russian occupied Chechen Republic of Ichkeria.

Cases such as Rizvan W. clearly show us that Chechnya is not a safe haven, especially for young men. 37 year old Rizvan W was arrested after their voluntary return from Austria. After receiving a negative decision in their asylum case, Rizvan and his wife Salina were sent back to Chechnya by the Vienna Office of the International Organization of Migration on the basis of the couple’s decision for voluntary return. In August 2011, five month after their arrival in Grozny, armed special forces surrounded the family’s home early in the morning, since when Rizvan W has been in custody. He is accused of the “participation in armed rebellion in 1999 against the Russian army under command of Shamil Basayev” and his stipulated penalty is 15-20 years in prison. Salina, a 31-year old brown haired mother, is now alone with her two children in a small apartment on the outskirts of Grozny.

In a cafe in Grozny, a 26-year old returnee from Austria said that he was called to a pro-Russian police precinct two or three times a week. He said that under duress he was forced to sign a confession to a crime which he did not commit, thus finally he accepted the collaboration with the intelligence service. He is nervous and scared. “I cannot live here,” he says. His friend, a returnee from Norway, has been forced to disclose the names of political opponents in the Norway diaspora. To remain in the homeland, there are only two options for them: they will either be informants or they will join the “fighters in the forests”. The questionable practices of pro-Russian security forces have often pushed young men to choose the latter. It seems that the pro-Russian authorities create their own enemies.

A week after the meeting in Grozny, one of the former asylum seekers, Malika M., sent an e-mail stating that she was concerned because she spoke openly to the Austrian journalists. They assured her that her real name would not be published and she calmed down. And only then, she told a story that she had concealed during the meeting. “The [pro-Russian] Chechen authorities accused her husband of sticking with the rebels”, but in fact it was not true. They could manage to return their homeland with the financial help of their relatives and friends. Yet, nothing has happened to her husband, but Malika M. is afraid. “In reality, life is dangerous here. You never know what the authorities intend to do to us. Corruption is everywhere and the law does not exist,” she said. The family really regrets that they have returned.

For the Austrian authorities, the voluntary return cases are closed when the Chechens are on the plane. Human rights organizations or the authorities normally monitor the voluntary returnees for a minimum of one year, but it seems that the monitoring is not working well due to the distance and security problems in the Russian occupied Chechen Republic of Ichkeria.