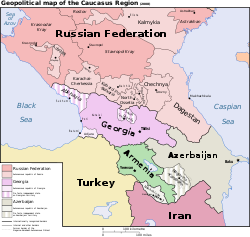 Russia’s North Caucasus region is Europe’s deadliest conflict today, with some 574 deaths already this year, and the killing is unlikely to end soon.

The simultaneously-released first two reports in the International Crisis Group’s new project examine the sources of conflict in the region and the challenges Russia faces in integrating it into the broader federation. The Challenges of Integration: Ethnicity and Conflict explores inter-ethnic tensions that have festered since the collapse of the Soviet Union. Islam, the Insurgency and the Counter-Insurgency analyses the growth of fundamentalist Islam, the Sufi-Salafi schism, the Islamist insurgency and the government counter-insurgency. A report to be published in a few months will elaborate on governance and economic issues and offer specific policy recommendations relevant for the full three-part series.

Ethnic grievances, exclusionary historical narratives and competition over land and decision-making fuel tensions in a number of multi-ethnic republics in the North Caucasus, especially Dagestan, Kabardino-Balkaria and Stavropol Krai. These unresolved tensions are already causing hate crimes, protests and clashes. With the recent revival of national movements, changes in the political party law and the return of elections of regional leaders, they could lead to further ethnic mobilisation.

“The insurgency that carries out almost daily attacks in the region and has also targeted Moscow and other cities was first associated with Chechen separatists and now is mainly jihad-inspired”, says Ekaterina Sokirianskaia, Crisis Group’s North Caucasus Project Director. “But the causes of violence are as much about unresolved ethnic issues, lack of the rule of law and the region’s poor integration into Russia as about religion”.

The challenge of ethnic nationalism has been most evident in Chechnya, where two bloody wars caused tens of thousands of deaths. The failure of the Chechen state-building project and the ruthless manner in which Moscow responded to the separatist movement there helped transform the nationalist cause into an Islamist one, with a jihadi component. The conflict had a profound effect on the entire region across which the insurgency has now spread.

The insurgency that feeds off these grievances unified under a single leadership in 2007, seeking a regional political unit founded on a strict interpretation of Sharia (Islamic law). It no longer engages in lengthy fights with the Russian military, but it continues to attack security forces, state officials and traditional clergy with bombings and shootings, and commits terror acts as far away as Moscow.

The state’s response has mainly focused on law enforcement. Commanders have significant room for manoeuvre, especially in the establishment and running of counter-terrorism operations. Heavy-handed measures, including forced disappearances, torture and killings have encouraged a new generation of disillusioned youth to take up arms. But a new model, including a more open religious policy and the establishment of commissions to rehabilitate former fighters, especially in Dagestan and Ingushetia, may offer a way to gradually reduce the violence. Which approach ultimately prevails will go a long way to deciding the manner and speed with which this conflict is resolved.

“Many in the Russian government have come to understand the limitations of a counter-insurgency policy that employs only hard-security measures”, says Sabine Freizer, Crisis Group’s Europe Program Director. “A long-term comprehensive approach that joins ethnic policies, inter-confessional dialogue, reintegration of ex-fighters, rule of law and strengthened institutions is more likely to bring success”.