Attack on Office of HRO in Nizhny Novgorod 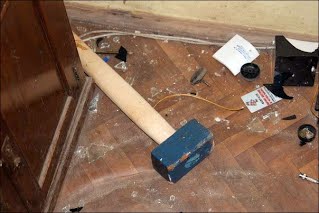 In Nizhny Novgorod there has been yet another attack on the office of human rights defender Stanislav Dmitrievsky, staff member of the Foundation for Tolerance. Dmitrievsky says that in the semi-basement premises, three windows with reinforced glass were broken, and the office has been daubed with orange paint, Grani.ru reports.

“We looked at the video recording. There were four people who carried out the attack. They followed a plan. One with a sledgehammer, another with a crowbar, and a third with paint. All were wearing masks,” Dmitrievsky writes on Facebook.

According to Grani.ru, this was the sixth attack on the office this year. On 2 March a window was broken with a brick, and the door to the office was covered with orange paint. On 24 March there was an attempt at arson. The front of the building was covered in petrol, windows were broken with Molotov Cocktails. In March a whole series of provocations were carried out against members of the opposition in Nizhny Novgorod, including an attack on the apartment of Yury Staroverov, an activist with The Other Russia and a participant in the Nizhny Novgorod Civic Council. In 2008 Dmitrievsky’s apartment was attacked: a window was smashed with a brick and threats and insults were scrawled on the walls of the building. 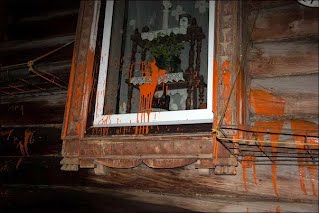 Dmitrievsky says: “The office is in the basement of a small, private house of 19th century construction, which the human rights organization Group of Free People rent for implementation of the project Courier of International Criminal Justice. On these premises all kinds of organizing committees of protest rallies hold their meetings, and other opposition groups meet, people come here to collect leaflets, newspapers and so on.”

“At the same time as the attack on our basement took place, flyers were posted around the city. There was a photo of a group of members of the opposition naked in a bathhouse, and against this background there was a picture of me in a suit (it seems the little swine have some respect me after all!) and the words ‘We are P-dophiles’ ,” Stanislav Dmitrievsky says.

Courtesy of: Rights in Russia (hro.org)