Russian opposition activist jailed for four and a half years 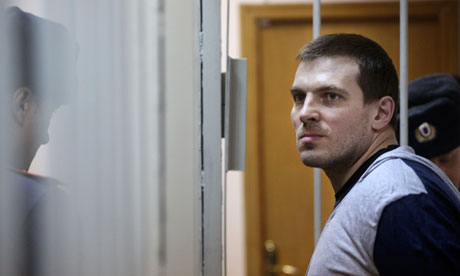 A Moscow court has given a four-and-a-half-year jail sentence to an opposition activist, the first of 18 people on trial for protesting against Vladimir Putin’s government.

Maxim Luzyanin, 36, co-operated with investigators and pleaded guilty to charges of participating in “mass unrest” during a protest on 6 May, the eve of Putin’s inauguration for a third term as president. The 17 other men and women charged in the so-called Bolotnaya affair – named after the site of the protest – have maintained their innocence.

Fellow opposition activists and sympathisers took the harsh sentence as a sign that heavy jail terms awaited the rest. “Recognising non-existent guilt in order to soften the sentence doesn’t lead to anything in this system,” tweeted Mark Feygin, an outspoken lawyer for the jailed punk band Pussy Riot. “These punishments carry a demonstrative character.”

The Bolotnaya Square protest in May was the only one to turn violent in the nearly year-long wave of demonstrations that brought on to the streets tens of thousands of people opposed to Putin’s return to the presidency. Clashes broke out after police blocked access to the protest site to thousands of protesters.

The arrests have come slowly, spanning May to October. Some activists have been picked up from their homes. Several have said they were not near the site of the unrest in which they have been implicated.

Luzyanin, arrested in late May, pleaded guilty to “participating in the unrest” and “using violence against a representative of power”, reportedly admitting to beating a police officer and throwing rocks. Officials said around 20 police officers were injured in the clash. All received free flats as compensation.

Although footage of Russia’s riot police beating protesters was widespread, and their actions criticised by Putin’s human rights ombudsman, no charges or punishment have been issued.

The start of trials in the Bolotnaya affair comes amid a wider crackdown on Russia’s anti-Putin opposition. A series of repressive laws, coupled with a campaign against a leading leftist opposition group, has sown fear among many.

Sergei Udaltsov, the leader of the Left Front and a protest organiser, faces up to 10 years in prison after being charged with conspiracy to provoke mass unrest. He responded to Luzyanin’s sentence by writing on Twitter: “Four and a half years for Luzyanin is a challenge to society and the start of the jailing of the opposition. We can only protect ourselves by coming out into the streets en masse.” A protest is planned for 8 December.

Prosecutors asked for the Moscow court to give Luzyanin six and a half years. It decided on four and a half after taking into account his guilty verdict, co-operation with the investigation, and the fact that he is the father of a young child.

Courtesy of: The Guardian