Moscow-Nalchik impressions of the young opposition rising in the Diaspora 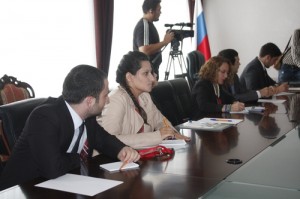 Between September 1-8 2013, we have attended a series of meetings on behalf of KAFFED (Federation of Caucasian Associations) in Moscow and Nalchik as invitees of Russian Federation Federal Agency. Out of 14 invitees (7 from Turkey, 7 from Jordan) one from Turkey could not make it because of his studies and another one from Jordan was not allowed to enter Russia. Without any reasonable explanation from the officers, he was detained and deported back to Jordan. Thus, we have seen the ugly face of the state at our first step in Russia.

First meeting took place at the European Department of Foreign Ministry of Russian Federation, and it was hosted by the vice-director of the department who is responsible for Turkey and Greece. As he may not want to speak of the issues what we want to speak, he talked very long about the developing relationship between Russia and Turkey. Towards the end of the meeting we managed to bring forward the issue of Circassians and Sochi. The vice-director who knows very well about our [Circassian] organizations, complained about the aggressive approach of Caucasus Forum, by naming this organization directly. He said: “Some Circassian organizations follow this aggressive line. And unfortunately these aggressive actions are happening frequently. Especially the groups gathered in Ankara and Istanbul hold events aiming to stop the Sochi Olympics and saying bad things about our leaders. We will not tolerate such approaches. This kind of actions makes any solution difficult.  It is nonsense to establish a dialog with such organizations. We know the leaders of KAFFED (Federation of Caucasian Associations, Turkey) very well and we have a good relationship with them.”

Another officer of Foreign Ministry said that the archives should be studied to have an objective view on the Sochi issue. He claimed that the public has been informed wrong or incomplete information. When we later asked him: “Do you think that the Diaspora has wrong or incomplete information about Sochi? If so, what is the right information?” He avoided to answer this question and preferred to change the issue. Since the most part of the meeting was reserved for Turkish-Russian relationship, we had no more chance to talk about Sochi and Circassian issues.

In the afternoon, we have met the officer of Russian Federal Agency who invited us at the first place. He talked about his organization and its goals. The primary goal of the organization is to develop Russian language and to show world that the multi ethnic Russian Federation is a powerful country with peoples living in union and solidarity. So, we understood that the aim of this meeting is not to listen us and learn about our expectations, but it’s to demonstrate how strong Russia is and how impossible to resist it!

Our meetings in Moscow took a few days. We had meetings with the officers of Institute of Eastern Studies, House of Peoples and Moscow Municipality. The vice director of the Institute of Eastern Studies, a fellow Circassian, Ramazan Davur talked long about that we should leave the past aside and work for the future. If I need to summarize his views: “Put genocide and exile issues aside and try to establish good relations with Russia”. I don’t bother to say anything about other meetings, since there was nothing remarkable in the content.

In the evening of September 3rd, we travelled to Nalchik. On the next day, we have meet the vice-President of KBR (Kabardino-Balkaria Republic), Muhammed Kodzokov and the Minister of Health, Public and Religion, Mihail Kumukov. The vice-President talked briefly about the republic. We spoke of the problems of Diaspora, situation of the students who are studying in Nalchik, how to teach Adyghe language to new generation in Diaspora and projects that can strengthen the homeland-Diaspora relationship.

On the same day, we had another meeting with attendance of vice-President of KBR parliament and a few members of the parliament. We talked about the problems and expectations of Diaspora and potential projects about repatriation. However, the most important part of the meeting for me was the part which we could observe the views of the politicians about Sochi Olympics. We told to the vice-President that we do not want Olympics to be held on a land we consider as a land of genocide and later asked him about his views on this issue. He answered us: “We want youth to leave their hard-line views on this issue. Olympics are game of peace and it brings goodness. There are a lot of locations on which genocide was perpetrated. If we try to live today with the arguments of past, that will be a very dangerous behavior. For some reason, some foreign organizations are trying to use Sochi. With this propaganda, they are trying to attract our young people in Diaspora. Sochi was the stage of a bloody war during Russo-Caucasian war and both sides lost their people. How do we benefit reminding ourselves the past? We reach nowhere by putting ourselves in an overwhelmed position. We have suffered once; we do not want it to happen again. I do not know how satisfying my answer for you is, but we have developed our language and culture with the help of Russia. We became global level country. We have to take lessons from the past. We reached the old population figures of Kabards after 150 years. We own a powerful country like Russia. You do not even have right to use your own family name in Turkey. When we see the rights which Russia brought us, we do not want to repeat our mistakes in the past. We survive with the help of Russia. I hope Diaspora accepts it that way and does not try to oppose Russia. We want to continue our way by establishing good relations with Russia”.

We have delivered our demands primarily on exile and Genocide and other issues during the meeting. We declared that we are against Olympics to be held in Sochi, the land of Genocide. We have listened the views of officials from Moscow and Nalchik. Especially the views of the vice-president of KBR shocked us. Even the Russian officials did not defend the Russo-Caucasian war in the way he did! As the views of the officials made it clear, there is no possibility of an effective opposition to Kremlin that can be based in local administration in the homeland. However, the rising opposition within the Diaspora since the Sochi Olympics come up, triggers a momentum for the opposition movement within the NGOs in the homeland. This momentum is not enough yet but considering the recent detention of the activists, we can see it is on a level that can already annoy Russia. I hope that this Olympics to be held on the land on which my forefathers were murdered will cause an awakening of Circassians who unaware of our history and bitterness of the past, pursuing others’ agendas both in homeland and Diaspora.